So important was Caribbean trade to the new United States, that in 1793 our government opened one of its earliest consulates on the island of Dutch-owned Curaçao in the Caribbean Sea.  Today Curaçao forms part of the Dutch Caribbean together with Aruba, Bonaire, Saba, Sint Eustatius, and Sint Maarten.

Currently the U.S. Consulate General conducts diplomatic relations with the Dutch Caribbean.  It also provides a variety of American citizen services.  Due to the strategic location of the Dutch Caribbean for the U.S., the consulate wrestles with major issues such as securing U.S. borders, thwarting terrorism and fighting international crime, especially narco- and human trafficking.  The Consul General resides in the historic Roosevelt House, which was the local government’s gift of property to the United States in 1950 as an expression of gratitude for U.S. protection during World War II.

Governor of the Netherlands West Indies, Leonard A.H. Peters, and President Truman’s representative, the Honorable Stanley Woodward, spoke during the ceremony in which the property was deeded to the United States government.

We are gathered here today to witness a unique happening in the history of the relations between this country and the United States of America.  In the course of years our relations have been very happy and during the last world war they became very dose.  When the national interests of the Netherlands and the U.S.A. were bound together and the national policies were united in the one purpose of winning the war and defeating the common enemy, these islands of the Netherlands West Indies received valiant and most valuable aid from the United States military forces.

American soldiers of the Navy, of the Army and of the Air force came to the Netherlands West Indies to assist us and to defend these islands, which were so important for the war effort.  American assistance in defense, American assistance in the supply of essential commodities to keep people alive and to keep industry going, have saved the Netherlands West Indies when a very capable and powerful enemy threatened disruption of the entire Caribbean.

When the war in the Caribbean had been won and the Allies also in Europe had obtained complete victory, the Legislative Council of this country requested the Government to establish a memorial in recognition of the great sacrifices made by the United States for the protection of the Netherlands West Indies during the war and, as a special tribute to that great leader whose farsighted policy and untiring endurance contributed immeasurably to the allied victory.  This memorial was to be identified with the name of Franklin Delano Roosevelt, late President of the United States of America. 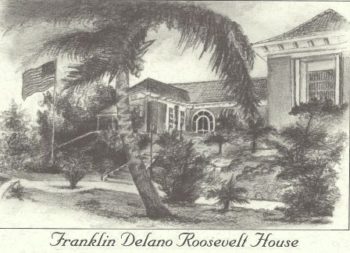 On October 31st, 1945 the United States was offered a gift of land and building to be used by the American Consul General at Willemstad.  In his letter of April 13, 1946 to Governor Kasteel, President Truman accepted the gift in the name of the United States of America, as a memorial of perpetual friendship between the people of the Netherlands West Indies and the people of the United States I wish to express my great appreciation to the former Director of Public Works, Mr. Groote, who had a major share in the preparation of this construction, to the architect Mr. van Ammers who conceived the plans for this memorial and to Mr. van der Kwast, who undertook the construction of this building. – We are greatly honored that President Truman has appointed a Personal Representative to attend this ceremony.

It is, as well, a tribute to the generosity of the people of these islands. But the gift of this building is more than an expression of gratitude or generosity.  This structure is a monument to the friendship that has existed between the peoples of these islands and the United States for untold years – a friendship that has endured through calm and strife and has emerged from the last global conflict stronger than ever.  The word “friend” means “one attached to another by esteem, respect and affection”.  By these criteria the Netherlands West Indies and the United States are truly friends.  They have a mutual esteem and respect for one another and there are deep bonds of affection between the two peoples.  What could be more fitting to this friendship than the useful monument of great beauty such as you have created?  It is certainly appropriate that the “President Franklin Delano Roosevelt House” should be dedicated to the memory of the late and great President of the United States.

As we all know, President Roosevelt was very proud of his Dutch ancestry.  And well he might have been, because of the many sterling qualities which the whole world associates with the Dutch character: perseverance, common sense, honesty, and above all, an unconquerable love for freedom.  These elements in his character contributed greatly to the enlightened leadership President Roosevelt exercised in helping the free world in its fight against fascist slavery.  With these traits in his character, he took on his own shoulders many of the tremendous burdens of the war and he thus was a constant inspiration to freedom loving peoples everywhere when dark clouds hovered overhead.

Governor Peters, people of the Netherlands West Indies, in accepting this gift for the President and the people of the United States of America, I wish to express to you their very deep appreciation for this generous act and to assure you of their wholehearted friendship, a friendship dating back to 1776, when the Dutch Governor of St. Eustatius fired the first formal salute to the new American flag, constantly preserved through the years, and further witnessed today by the dedication of the President Franklin Delano Roosevelt House.”