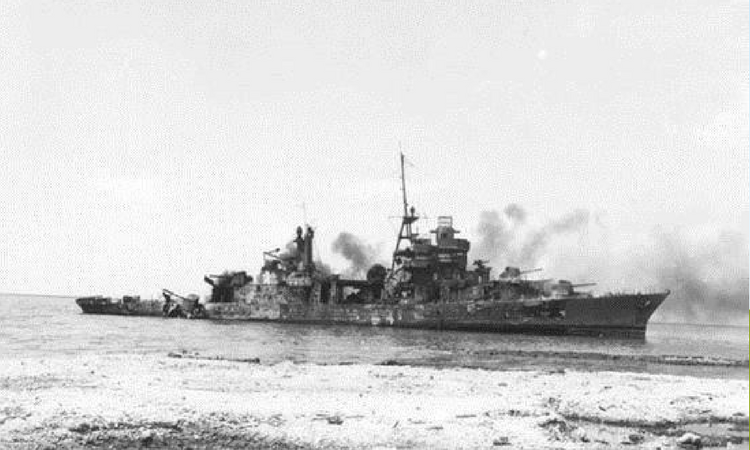 The USS Erie was torpedoed on the afternoon of the 12th of November, 1942, while flagship of the convoy escort. At that time the convoy was some four miles south of Willemstad, Curacao, N.W.I. Latitude 12-05 North; Longitude 68-55 West. A German submarine, U-163 passed through the sound screen undetected, and fired four torpedoes, one of which struck the rear starboard (right) quarter just below the X 6” 47 turret of the USS Erie. The explosion blew a large hole in the hull, and ripped the deck from side to side. The torpedo’s explosion was followed by another explosion of considerable violence in the same general vicinity. This was from secondary explosions and fires from the fuel oil tanks, diesel oil tank, and the aviation gasoline compartment that was ruptured from the impact. The fires spread quickly throughout the damaged area, with numerous secondary explosions from 100lbs G.P. aviation bombs, depth charges and the ready ammunition of the 6” 47’s and other smaller calibers added to the destruction.

The USS Erie was at the time patrolling station at about 14.7 knots in a sector about 4,500 yards ahead of the convoy. A break was noted in the surface of the water about 1,500 yards on the starboard beam. It appeared as if two fish might have made it, though the spray appeared more violent. It was then evident that it was the porpoising of two torpedoes. The command was given to “Come Right!” As this command was being given, other reports of torpedoes coming in from the starboard quarter came in from lookouts, signalmen, and gun crews. The order was then given for “Hard Left Rudder, Full Speed Ahead!” The officer of the deck then sounded the siren for collision. From the time the torpedo that his was spotted, it seemed to be curving very slowly left, then just before reaching the ship the torpedo’s course straightened out. It then hit the ship. The other torpedoes passed ahead of the USS Erie. After the ship was beached, a muster was held and it was established that the following Officers were missing:

Loss of the Erie

The Erie was beached close to shore two miles north of Willemstad, Curacao, about an hour after it was torpedoed. Three minutes after grounding, she was abandoned, since firefighting efforts proved futile and the ship was nearly encircled by flaming fuel oil and gasoline. Fires continued to burn above and below the main deck. The Erie was further damaged topside by the explosion of aircraft bombs (two 325 lb. depth bombs and two 100 lb. general purpose bombs) that were in ready stowage on the airplane deck, during the period 12 November to 14 November 1942. The fires above the second deck either burned out or were entirely extinguished by a fire fighting party and a local tug on 14 November.
The following day, a fire-fighting team (and specialized equipment), newly arrived from the Norfolk Navy Yard, entered the ship. Their efforts over the next two days extinguished all remaining fires on the second deck and below.
Naval officials were then able to examine the entire ship and concluded that the vessel would be salvaged and moved to the inner harbor at Willemstad for further inspection, in order to determine whether the Erie would be rebuilt.

Salvage operations began on 19 November under the direction of the firm of Merritt, Chapman, Scott, with the assistance of about 40 Erie crewmembers who were quartered within Willemstad’s inner harbor. Some 375 tons of debris and liquids were removed over the next week and a half. On November 28, the salvage vessel Kellerig and two tugs eased the vessel off the sandbar, and she was then towed into the inner harbor at Willemstad.

There the Erie was moored to special buoys in Macola Bay, just offshore of the Naval Section Base “Parera.” After additional inspections on December 3-4, U.S. Navy officials concluded that the reconditioning of the ERIE was feasible, if the following undocumented plan could be implemented. First, removing additional scrap and pumping out two port fuel tanks would improve the ship’s list and trim. Then, the Curacao Petroleum Industries Company would move the Erie into a local dry dock and make repairs that would enable safe towing to a U.S. repair facility.

The emptying of the port fuel tanks (A-418-F and A-4-F) was completed during the evening of 4 December. Anchors and chain had also been replaced on the forecastle. This decreased the vessel’s list from 8½ degrees port to about 5 degrees to port. Overnight and in the early morning hours, Erie’s starboard reserve fresh water tank (D-1-W) flooded, probably due to the failure of a watertight door. The result of the gradual addition of this additional 43 tons of weight was the slow movement of the ship to an upright position and then to a 10-degree list to starboard, resting against the fuel oil barge that was used for lightering the ERIE. As the vessel heeled to starboard, additional flooding occurred in the engineers’ washroom and from there into the engine room.

When Marine guards aboard ship reported this, orders were given to counter-flood the two port tanks that had been emptied the previous day. The impact of this action was fairly immediate and disastrous. Twelve minutes after the counter-flooding of tank A-4-F, the ERIE moved slowly upright and then quickly heeled to port. As one eyewitness reported, the ERIE “eased into the water with air whistling through her ports, hatches and open spaces, debris floating around her.” She came to rest with only small sections of her forward keel and starboard shell visible above the water. Further efforts to raise and repair the vessel were deemed unwise, and the hulk was left in Willemstad harbor. On 28 July 1943, the ERIE was officially stricken from the Naval Register.